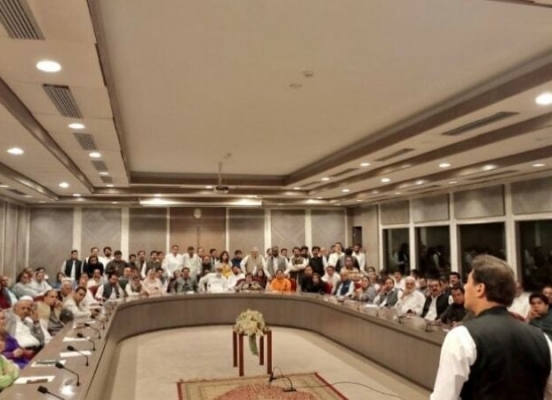 The Pakistan Tehreek-i-Insaf on Monday decided to resign from the National Assembly, minutes before the election for the new prime minister is scheduled to place.

The decision was taken in a party's parliamentary meeting, which was chaired by PTI Chairman Imran Khan, at the Parliament House today afternoon.

"The parliamentary party has decided to resign from the assemblies against the imported government," PTI Central Information Secretary Farrukh Habib confirmed in a tweet.

Immediately after the announcement, Murad Saeed tendered his resignation as member of the NA — the first from the party.

Speaking to DawnNewsTV shortly afterwards, he confirmed that he made the decision in line with the party's narrative. He reiterated the former prime minister's claims of a foreign conspiracy, stating that sitting in the NA after these revelations would be akin to be being a part of this plot.

"Should foreign powers have the right to make or break governments in Pakistan?" he asked.

Saeed also highlighted the charges against the opposition's candidate for prime minister, Shehbaz Sharif. "They were and are corrupt," he added.

Former maritime affairs minister Ali Haider Zaidi also followed suit, announcing his resignation on Twitter. He said he had submitted his resignation to the party chairman.

"No way we should legitimise this foreign-funded regime change in Pakistan. The battle for the sovereignty of Pakistan will now be decided on the streets by the people, not the these looters," he said.

Former minister for Kashmir Affairs and Gilgit-Baltistan Ali Amin Gandapur also shared a photo of his resignation on the party's letterhead.

"I am proud to be a follower of Imran Khan and will fight till my death for the freedom of Pakistan and parliament," he said.

Yesterday, PTI leader Fawad Chaudhry had said that the decision to resign was tied to the acceptance of PML-N President Shehbaz Sharif's nomination papers for prime minister's elections, to which the PTI had raised objections.

He said it was a "great injustice" that Shehbaz would be contesting the election for the prime minister on the same day he is to be indicted in a money laundering case.

"What can be more insulting for Pakistan that a foreign selected and foreign imported government is imposed on it and a person like Shehbaz is made its head," he rued.

It is pertinent to mention that a special court (Central-I) of the Federal Investigation Agency was to indict Shehbaz and his son, Hamza, in a Rs14 billion money laundering case today but the court deferred the indictment.

The NA session today will begin shortly for the election of a new prime minister after an unceremonious end to Imran Khan's tenure through a no-confidence vote.

Shehbaz — who is the former joint opposition's candidate for the prime minister's slot — and PTI's Shah Mahmood Qureshi were in the race to become the country's new prime minister.

Both Shehbaz and Qureshi had filed their nomination papers yesterday. During the submission, the PTI had raised objections to Shehbaz's nomination and subsequently PTI's Qureshi and Babar Awan had exchanged heated words with PML-N leaders Zahid Hamid and Atta Tarar.

The senior PTI leaders had submitted objections against Shehbaz, stating that the latter was contesting the election on the day of his expected indictment in a money laundering case. They were of the opinion that he did not deserve to be the new PM due to his “involvement” in corruption cases.

Among the two, Shehbaz is said to have brighter chances of making it to the top slot. Meanwhile, the possibility of Qureshi going ahead with contesting the election was earlier uncertain as the PTI was deliberating on resignations from the lower house of parliament.

Now it appears Qureshi would also resign in line with the party's decision, though so far no statement has been issued on the matter. If that happens, Shehbaz would be elected as prime minister unopposed. 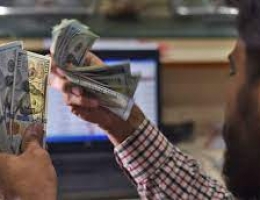 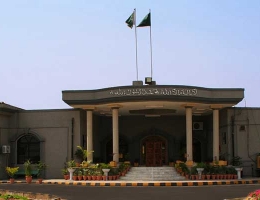 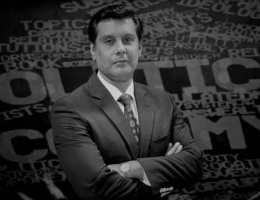 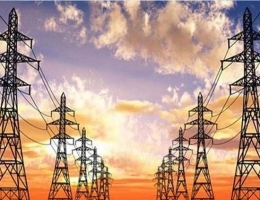 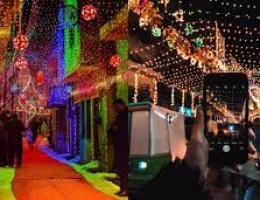